The award was presented for a newly developed transparent and flexible film sensor which can convert voltages with high sensitivity. Film of sensor is made of polylactic acid (PLA).

The new sensor is already in use as pressure detectors in touch panels. Wide future uses in wearables and IoT applications, in addition to next generation intuitive operable human-machine interfaces (methods and appliances mediating information transmission between humans and machines), are expected. 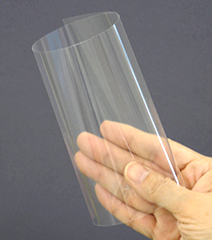